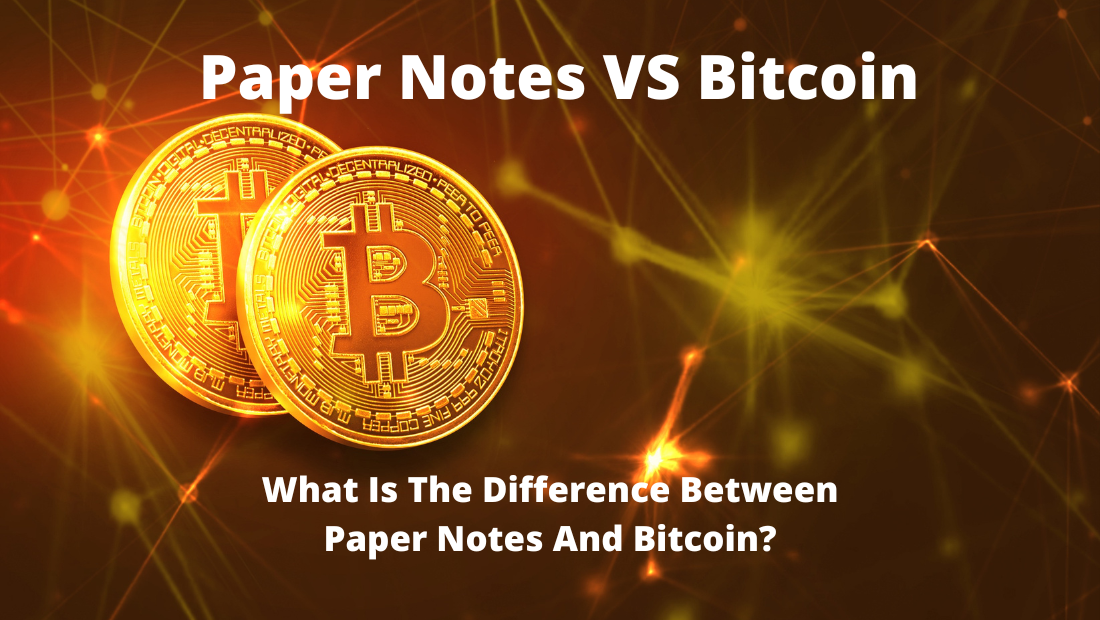 Believe me or not, cryptocurrency such as Bitcoin is capturing the money market space very quickly. It would be the future money that we would use very soon for trade. The time of paper notes or fiat money is about to end soon. Let’s dive in and learn about the difference between paper notes and Bitcoin.

What Is The Paper Note?

A paper note often called fiat money is a kind of currency that is issued by a state and regulated by an authority such as a central bank. This type of currency is generally not backed by any commodity anymore and is said to be legal tender.

The value of fiat currency is based on the current credit of the economy. Almost every state has its fiat currency such as the US dollar, Euro, Pound, Dirham, PKR, INR, and others. The value of these currencies is derived from the demand and supply in the market.

The history of fiat currency is very old. It is supposed that the first fiat currency was invented around 1000 AD in China when this type of currency was based on different commodities such as gold, silver, and rare metals. President Richard Nixon was the first man who stopped the conversion of dollars into gold.

Bitcoin is the first ever invented cryptocurrency that came into being in 2008. This is a digital currency that is unreal and virtual. Bitcoin is neither decentralized nor regulated by any state or authority.

After the popularity of Bitcoin, there are several other cryptocurrencies invented in the past decade. This currency uses a special cryptography technology to process, secure, and verify transactions. Being an unauthorized currency, Bitcoin is hard to change or manipulate the value of this digital currency until there happen certain conditions.

What Is The Difference Between Paper Notes And Bitcoin?

Paper notes and Bitcoin, both come with different properties. Both currencies have some benefits as well as cons too.

Fiat money is regulated by an authority and has a similar value every time. It is not possible that you have $100 and after a week the value of these paper notes would increase to $110. It would remain the same all the time and you can use it for any specific purpose.

However, there is a possibility that you may not buy the same thing at the value you have bought a week ago due to inflation.

Bitcoin stands out as a commodity that can earn profits for you. The value of Bitcoin can change, every second, every minute, or every hour. This volatility makes Bitcoin a risky commodity though, but there are very less chances that you may lose something as the value of Bitcoin has increased 48% in the last year.

So, Bitcoin allows you to add profits to your actual value. This will help you to meet the inflation as well as to earn huge profits.

Whenever you have to transfer money to someone, the biggest issue you ever face is the next person has a bank account other than yours. This is a very frustrating situation and most of the time you ended up with anxiety.

If you are providing online services, this issue becomes bigger as there are several digital means of money transfer and it is not sure that the next persons use the same as you.

Bitcoin is a competitively easy-to-transfer commodity. This currency is transferred, managed, and kept online. So there is no need to have the accounts in the same banks or digital applications of money transfers to do payments. You can easily transfer your Bitcoins to anyone.

Fiat money and Bitcoin possess different properties and benefits. If paper notes are a legal way to sell and purchase, Bitcoin offers more flexibility to do the business in time. So, it all depends on your business requirements or usage and which one would you prefer.